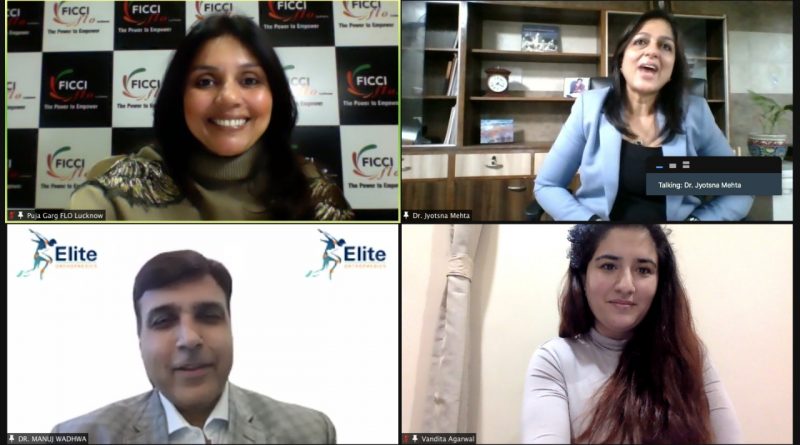 This virtual event was part of a  series of talks organized by FLO lucknow with eminent doctors about various lifestyle disorders plaguing the modern women.
Women are known to be multi-faceted and play vital roles in our society. There is always a fight against time for a working woman. As per ASSOCHAM, 68% of working women in the age bracket of 21-52 years were found to be afflicted with lifestyle ailments such as obesity, depression, chronic backache, thyroid, diabetes and hypertension.
One such disorders which plagues an alarming number of women today are bone related diseases like Osteoporosis and arthritis among others.
The speaker for this FLO event, Dr. Manuj Wadhwa is the Chairman & Executive Director of Elite Institutes of Orthopaedics & Joint Replacement. He has also worked for Fortis Hospital Mohali in the past as Director & Head Orthopaedics, Fortis Hospital, Mohali and as Director & Head – Max Elite Inst. Of Orthopaedics& Joint Replacement Max Hospitals UNR
Having performed over 40,000 joint replacement surgeries, Dr. Manuj Wadhwa is credited with performing the highest number of joints replacements surgeries, a feat recognized by Limca Book of World Records and 7 other published records. He has been the recipient of the prestigious Ranawat Adult Joint Reconstruction Fellowship at Lenox Hill Hospital, New York, USA
Dr. Wadhwa is responsible for launching FIRST DIGITAL ORTHO SUITE in Asia Pacific. He has to his credit, the launch of 30 years knee concept & Personal fit joint replacement in India & the Launch of high flexion knee & hip replacement, computer &
CT based surgeries, shoulder, elbow & finger Joint replacements in North India.
Among his many accolades, he is the proud recipient of the prestigious Pioneers Times of India Award and Czars of North by HT.He has also been honored with “Man of the Year” award by American Biographical Institute, USA, “Rashtriya Rattan Award” and the premier “Rajiv Gandhi Shiromani Award”.
Talking in detail about the causes which make women more prone to arthritis, Mr. Wadhwa said “genetics, hormones, joint stability and lower muscular strength all are reasons which are big contributors to arthritis in women. The only way to holistically counter this is by maintaining a healthy weight, avoiding heavy and processed foods, maintaining healthy blood sugar levels and exercising regularly.”
He also made the audience aware about the new advances inbthe field of orthopedics and the new breed and type of Joint replacement surgeries that
are available today.
He also suggested a list of super food besides eating lots of protein which improves muscular strength thereby easing pressure on bones and joints  he recommended that women take a lot of berries, whole grains, green leafy vegetables, nuts and seeds and fish oil.
Talking about the event, Puja Garg  Chairperson FICCI FLO Lucknow said,”I have always believed that true empowerment of women can happen only when they are healthy in mind and body.
This year, we have made a concious effort to bring this discourse back to improving health of women and in particular  discuss and look at holistic and natural remedies for life style diseases that plague the modern woman. Todays event was a milestone in that direction.”
The event was ably moderated by Dr. Jyotsna Mehta, remember of FLO Lucknow and was attended by members of FLO all across India. It was
also aired live on Facebook.